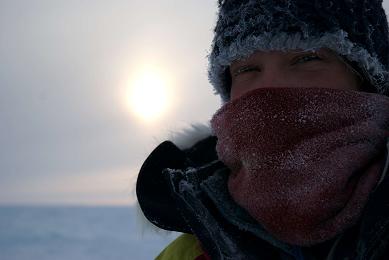 Sarah has a strong zest for life and approaches challenges with a bold determination. After graduating from Sedbergh, she has combined her passion for adventure and film. Sarah is the youngest person to reach both the North and South pole. She also enjoys kite-skiing & kite-boarding, snow boarding, downhill & cross country skiing, rugby, rock climbing, and whitewater kayaking. Sarah will guide the North Pole expedition, working for North Winds, based in Iqualuit, Canada.

2009 Pittarak, Gobi expedition The Pittarak team (Eric McNair-Landry, Sarah McNair-Landry and Curtis Jones) headed to Mongolia, their goal to cross the Gobi desert by kite buggy. Starting at the base of the Altai Mountains, the team headed east into the desert. They traveled carrying their water and food on the buggies. After 35 days of kiting (and hauling when their was no wind), the team completed the crossing.

2008 Global Warming 101, Ellesmere Expedition: A team of 6 including Will Steger, Sam Branson, Toby Thorleifsson, Sigird Ekran and Eric and Sarah McNair-Landry headed to the Canadian high arctic islands with three teams of 10 dogs. They left Resolute and headed along the West side of Axel Heiberg towards Ellesmere Island, traveling through rough ice for 62 day. The goal was to raise awareness of Climate change, highlighting the ice shelves and glaciers in the arctic. Website: www.globalwarming101.com

2007 Pittarak Greenland Expedition: A team of three, Curtis Jones, Eric and Sarah McNair-Landry, headed to Greenland to complete a 2,300 km crossing of the ice cap, leaving from the southern tip near the village of Narsarsuaq and ending in Qaanaaq, one of the most northerly communities. They spent 45 days traveling by kite-skiing, cross-country skiing, and hiking. The team managed to cover an amazing 412 km by kit-ski in 24 hours. Website: www.pittarak.com

2006 Top of the World North Pole Expedition: Sarah McNair-Landry, Paul Landry, David de Rothschild and Martin Hartley departed from Northern Russia, skiing and dog sledding towards the North Pole. Once they reached the pole, they continued on, hoping to complete a full crossing of the Arctic Ocean. Unfortunately, after 100 days on the polar ice, due to warm conditions and the ice breaking up they were forced to abandon their goal of finishing in Northern Canada . Website: www.adventureecology.com

2004/5 Kites on Ice Expedition, to the South Pole and back: A 1,100km unsupported ski expedition to the South Pole from Hercules Inlet. hauling pulks weighting over 230lbs each, to reach the Pole in 52 days. When they arrived, Eric (20) and Sarah (18) became the youngest ever to reach the pole. Matty and Sarah also became the first Canadian women. The team of five (Hilary and Conrad Dickenson, Matty McNair, and Sarah and Eric McNair-Landry) picked up kite-skiing gear and kited back to the coast in 17 days. Website: www.kitesonice.ca

2003 Kids and Kites on Ice Greenland Icecap crossing: A crossing of the Greenland Ice cap, from East to West. This was Eric and Sarah McNair-Landry’s first expedition with parents Matty McNair and Paul Landry. They traversed the ice cap in 23 days, skiing, kite-skiing and dog sledding. Website: www.kidsonice.ca